I couldn't resist diving into the holiday season with an entry into Susanna Hill's holiday contest. I always have fun writing according to the rules she sets.

So this year, I thought and I thought, I wrote, and I tossed. Then, I wrote some more. I confess it was a toss up whether I would have something to enter, but I finally have an entry worthy (I think) of the contest.

Write a children's story (children here defined as approximately age 12 and under) in which wild weather impacts the holidays!  Your story may be poetry or prose, silly or serious or sweet, religious or not, based on Christmas, Hanukkah, Kwanzaa or whatever you celebrate, but is not to exceed 350 words (I know!  So much freedom after the Halloweensie Contest :))  (It can be as short as you like, but no more than 350!  Title not included in word count.)  Any kind of weather will do: sun, rain, sleet, heatwave, blizzard, tsunami, monsoon, hurricane, hail, tornado, etc!  Weather may be atypical for your setting (rain in Maine, frost in Florida), it may be extreme (blizzard instead of regular snow, drought instead of lush greenery), or it may be unheard of (spring flowers in Antarctica, snow in the Sahara, bathing suit weather at the North Pole), but whatever you choose, make us feel the impact on the holidays!  The wild weather may be a hindrance, a wish-come-true, a threat, a pleasant surprise, etc.  The field is wide open!  Have fun!  The wilder and wackier the better!  No illustration notes please. (And yes, if you feel compelled to submit more than one entry you may, just remember you're competing against yourself!)

Jack Jingle wishes he could be a bigger part of Christmas. But he’s too little to help in Santa’s workshop, too little to dress the reindeer, too little to load the sleigh.
“Humpf!”
It’s Christmas Eve and Jack’s kicking up snow when Santa’s hat tumbles by. Up and away it blows.
No one’s chasing it, so Jack jumps at his chance. He could be the biggest thing since Rudolph!
But first, he needs transportation. He commandeers a toy airplane. BADUMP-A-DUMP-A-DUMP. It’s a bumpy takeoff.
There’s the hat! Near Santa’s workshop!
NEEEOOOOW! Jack buzzes by.
Bernard, dozing at his workbench, startles awake.
“Thanks Jack!” calls Bernard.
Jack doesn’t hear him. His eyes are trained on the hat.
It dances away and darts into the stables.
Jack zooms in after it. He ducks as he enters, swiping left, swiping right. But from his fast-flying plane, the hat’s a blur. Jack exits with a handful of harnesses. JINGLE, JINGLE, JINGLE.
He tosses them to Victor, who’s grooming the reindeer.
“Thanks Jack!” calls Victor.
But Jack’s already out of earshot. He speeds to intercept the hat.
He swerves and swoops, and loop-de-loops. He doesn’t see the bag of presents, waiting for Quigley to haul.
It hitches onto the plane’s wing as Jack barrels by.
Oops. He detours to the sleigh.
“Thanks Jack!” calls Quigley.
But the roar of the engine drowns out everything.
It’s just Jack…and Santa’s hat. Time is running out.
The wind whisks the hat up, up, and up.
Hmmm…can an elf my size climb so high? Then, Jack’s eyes widen. Can Santa deliver Christmas cheers with icicles dangling from his ears?
Jack hunkers down. He twists and turns; his stomach churns. He rockets through clouds, sunshine, stars until…Santa’s hat begins to fall!
Down, down, down it dives – into Jack’s outstretched hands.
“YIPPEE!” Jack shouts.
Back home, he shyly returns the hat.
“Why Jack Jingle!” Santa ho-ho-hos. “Thank you! I shiver to think what Christmas would have been without you.”
Jack’s cheeks grow warm. He gets his Christmas wish at last.

Check out the other fun entries into Susanna's holiday contest. Enjoy!

Susanna Leonard Hill holds these fun contests every once in a while and I couldn't resist entering again (see below for my entry into her holiday contest last year) for her third annual Halloweensie contest.

"Write a 100 word Halloween story appropriate for children (title not included in the 100 words), using the words spooky, black cat, and cackle.   Your story can be scary, funny or anything in between, poetry or prose, but it will only count for the contest if it includes those 3 words (you can count black cat as one word) and is 100 words (you can go under, but not over!)"

But Billy was a ghost in the spookiest ghost town west of Texas. And ghosts don’t scare easy. She tested costumes:

A witch with a mean cackle,

A tarantula, a headless cowboy, a were-coyote. But nope, nada, not even a whimper.

Billy frowned. A ghost who couldn’t scare wasn’t worth a penny – especially on Halloween.

She thought and thought until...

Hello out there!  I haven't been actively blogging due to other obligations, but I couldn't resist Susanna Hill's 2nd Annual Holiday Contest.

"Write a children's holiday story beginning with any version of "Dashing through the snow in a one horse open sleigh."  You may use that actual opening, or you may change it to any similar version '[Verb of your choice]ing through the [any substance you choose] in a [conveyance of any kind].'"

So here goes, to the tune of Jingle Bells. Warning: Silly and stupid story follows.

How the Grinch Spends Christmas

Dashing through the snow
In Santa’s stolen sleigh
Over Santa’s toe
Laughing all the way. MUA-HA-HA!
Flying snowballs sting
I’m not at all contrite
How fun it is to toss and fling
The gifts into the night.

This morning when I woke
I thought, “The fun begins,”
I’ll lick the cookies clean
Return them to their tins
Pluck festive door wreathes bare
Chop down Christmas trees
Cram stockings -- not the kind you wear --
With coal lumps to the knees

Whooshing far and near
Dropping water bombs away
Then, Santa calls his deer
And rats! They do obey
He hums a little tune
Shakes his head so slight
Nails me with the last balloon
And flies into the night.


We were lucky to host Punxsutawney Phyllis from Susanna Hill's picture book, April Fools, Phyllis, on her cross country, cross-continent tour.  When she arrived, it was cloudy and 71 degrees.  She noticed it was a touch humid -- uncharacteristic for the San Francisco Bay Area.


Phyllis seemed homesick (she'd been on the road for months), so we tried to make her feel at home by doing things that groundhogs like to do.


First, we took her up high to our tree fort, where she could get situated.

Then, we did some digging in the garden.

Finally, we burrowed through a tunnel.

But we also wanted Phyllis to enjoy a true Silicon Valley experience.  So, when she was ready, we brought Phyllis to do some kid -- ahem -- groundhog testing at a Silicon Valley startup called Kiwi Crate, which sells monthly subscriptions of crafts for kids.

As you can see, Phyllis had an excellent time.


This morning, Phyllis flew out on the last leg of her trip -- to visit Robyn Campbell in North Carolina.

I could not resist posting on today's book, Huck Runs Amuck!  It is a fun read --  with a lovable, a very distinctive main character, and lots of unpredictability. 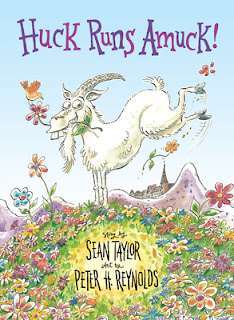 Opening pages:
"Here's a mountain goat by the name of HUCK.
Do you like his trendy beard?"

Synopsis: From Amazon, "Meet Huck. He loves flowers. FLOWERS, FLOWERS, FLOWERS. And he'll do whatever it takes to get a mouthful: climb the highest mountain, walk a tightrope, even defy speeding trains! It's true, he can't resist! But when his mad dash up a church spire is mistaken for a heroic attempt to save Mrs. Spooner's flowery hat (rather than a determined effort to eat it), Huck has a crisis of conscience. Can anything deter this goat from his gastronomical bliss?"

Resources:
I could not find any activities on the web specific to this book.  However, one possible activity could be based around the idea of making choices.  Huck's choice of eating Mrs. Spooner's flowery hat v. saving it could be a discussion point, with teachers asking children to provide reasons in support of either option.  Rhyming activities and rhyming worksheets may also be included into a lesson plan based around this book.

Why I like this book:
This book is fun to read aloud -- it is fast-paced, unpredictable, and full of the three R's -- rhythm, rhyme, and repetition.  The character of Huck, insane as he is about flowers, is hilarious and lovable.  The illustrations are whimsical and depict crazy Huck perfectly.

I swear I am not a cat lover, but here I am again blogging about a cat book. 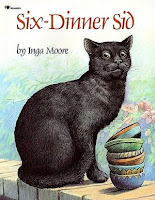 Synopsis: From School Library Journal, "Sid, a clever cat, has convinced six people on Aristotle Street that each is his owner so that he gets fed six different dinners every night. When the neighbors catch on, Sid moves to a new neighborhood."

Resources:
There are many lesson plans and activities on the web, most having to do with counting and math but also writing because of the story's multiple themes.

Why I like this book:
This is a simple, easy-to-follow story that is great for learning numbers (up to the number six!).  In addition, Moore does a wonderful job telling us about one cat -- Sid -- through describing his actions as six different cats -- very ironic.


Although I am no cat lover, I enjoyed Chester so much that I just had to recommend it.


While researching picture books that break the fourth wall, I came across Chester, a picture book about an ego-centric cat who hijacks his owner's picture book with his own red marker. 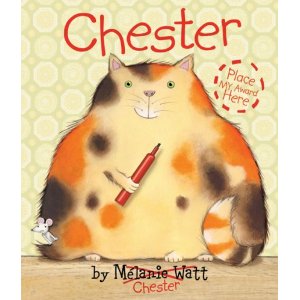 Opening page:
"Once upon a time there was a mouse. He lived in a house in the country.

Then the Mouse packed his bags and went on a trip very, very far away and we never saw him again!"

Synopsis: From Kids Can Press, "Chester is more than a picture book. It is a story told, and retold, by dueling author-illustrators.
Mélanie Watt starts out with the story of a mouse in a house. Then Mélanie's cat, Chester, sends the mouse packing and proceeds to cover the pages with rewrites from his red marker, and the gloves are off. Mélanie and her mouse won't take Chester's antics lying down. And Chester is obviously a creative powerhouse with confidence to spare. Where will this war of the picture-book makers lead? Is it a one-way ticket to Chesterville, or will Mélanie get her mouse production off the ground?"

Resources:
I couldn't find any resources for this book, but one fun activity could be picking out a picture book, reading the first few pages to use as a jumping off point to tell your own story.

Why I like this book:
Chester breaks the fourth wall and it does so one hundred percent.  In fact, "Chester" has red inked the cover and inside jacket flaps of the book as well as every page in between.  Author/Illustrator Mélanie Watt is so committed to "Chester" and his larger than life personality, that the character actually does come alive for me. I really enjoyed the out-of-the book experience, the feeling of spontaneity, and how the story takes on a life of its own.