Perfect Picture Book Friday: How I Became a Pirate

I am back after taking last week off to prepare for and celebrate my daughter's birthday. I spent hours in the kitchen and have to admit that I was beyond relieved when there were no more birthday celebrations left (don't tell her I said that).

So, back into the swing...here is my choice for Perfect Picture Book Friday. 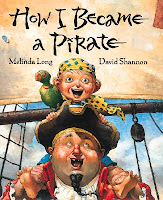 Opening page:
"Pirates have green teeth -- when they have any teeth at all. I know about pirates, because one day, when I was at the beach building a sand castle and minding my own business, a pirate ship sailed into view.  I knew what it was, because its flag had a skull and crossbones on it and because I could hear the pirates singing, 'Hey, ho, blow the man down.'
They were a little off-key."

Synopsis: From School Library Journal, "Jeremy Jacob is building a sand castle when a pirate ship lands nearby. His parents are preoccupied with other chores, so he takes off for an adventure on the high seas to help the men bury their treasure chest. He learns that buccaneers don't bother with manners or bedtimes, which is just fine with him, but it also means no bedtime stories or being tucked in. He tries to teach the pirates to play soccer, at least until the ball gets swallowed by a shark. When a storm hits, forcing the crew to return to shore, Jeremy solves the dilemma of where to bury the treasure-in his own backyard. He even makes it home in time for soccer practice."

Resources:
In addition to Harcourt's activity kit, which includes a word find, maze, coloring page, and thinking exercise, I found a wonderfully in-depth enrichment guide, which includes a section on stranger danger, made in support of the "How I Became A Pirate" show put on by First Stage, a theater company in Milwaukee, WI.

Why I like this book:
Pirates are fun.  Argh!  Parents everywhere will love to read this book aloud, just for the opportunity to talk like a pirate on a day other than International Talk Like A Pirate Day.  The story provides a fun-loving and amusing description of pirate life and the reasons why it might appeal to children like Jeremy Jacob.  While the pirates are wacky and entertaining, I love the reasons why Jeremy Jacob decides that pirate life is not for him after all.  Finally, David Shannon's over-the-top and rich illustrations are a perfect complement to this imaginative swashbuckling tale.